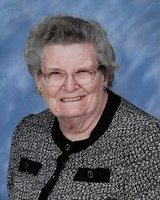 Virginia Wechtenhiser Moore March 21, 1923 - February 01, 2017 Virginia Ruth Wechtenhiser Moore 93, passed away Wednesday, February 1, 2017. She was born on March 21, 1923 to Ruth and Howell Odom. She is preceded in death by her parents, and first and second husbands, William (Bill) Wechtenhiser, and Henry Moore, and her four sisters. She is survived by sons and their wives, William (Pete) and Ali, Robert (Bob) and Connie, and Richard (Dick) and Mary Wechtenhiser. Grandchildren, spouses, great- grandchildren, and great- great-grandchild include: Tory and Syd Holland, (Daniel, Kindell Tucker), Kim & Chris Summers (Madison Reynolds, Maci, Teagan, and Shane), Julie Rankin (Devon & Susan Rankin, Dillon & Cassie Rankin, and Gracie Faye), Libby Wechtenhiser (Quinn, Jack, and Maxwell), and William & Kim Wechtenhiser. She was born and raised in Dayton Texas and later attended business school. She met Bill Wechtenhiser, the love of her life, in Beeville Texas, where he was stationed in the US Army during WW II. They carried on a courtship over the next two years while he was stationed overseas. After his discharge and return home to Pennsylvania, she joined him and they were wed in 1945. They moved to La Porte, Texas in 1948. After her boys were in school she returned to work at La Porte State Bank, and from there to Clear Creek State Bank. She was proud of her banking career. They retired to Hillister, Texas, where they lived happily until Bill’s death in 1989. She later married Henry Moore, whom she had known from First Baptist Church in La Porte. They enjoyed traveling, and church activities until his death. She moved to Swan Manor Assisted Living in Baytown Texas in 2011 until her death. She was a strong woman, especially in her faith, and was very charitable to the church and anyone who needed help. She was very devoted to her family and friends. She appreciated life until the very end, and maintained her sense of humor. She will be missed by all who knew her. Special thanks to the compassionate and loving staff at Swan Manor in Baytown where she called home for the last 6 years. A memorial service will be held at First Baptist Church, 310 S. Broadway, La Porte, Tx. Saturday, February 25, 2017, at 3:00 p.m. To send family condolences, please visit www.paululee.com In lieu of flowers, please contribute to your charity of choice.