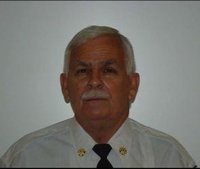 Funeral Service Saturday, Mar 18, 2017 11:30 AM Joseph L. Sease July 25, 1942 - March 13, 2017 Joseph L. Sease, 74 , of LaPorte passed away March 13,2017 at home after a lengthy illness. Born July 25, 1942 in Lake Charles, La. To Charlie and Meltha Sease who have preceded him in death. Joe graduated high school in 1961 and joined the navy serving 4 years, much of that time on a nuclear submarine, The USS Alexander Hamilton. 1966 went to work in the chemical industry for Upjohn which later became Dow Chemical Co., retiring in 1997 as Safety Training Coordinator. Also in 1966 he began his involvement with LaPorte Fire Department, where he served as Fire Chief for 30 yrs., while serving as Chief he developed the fire department from two part paid/volunteer fire stations to the fully manned paid/volunteer system of today. When he retired as the fire chief, Joe continued with the LPVFD as one of the assistant chiefs, took a position with the City of LaPorte as Emergency Manager for several years. Although he could no longer participate with the fire department they maintain an office for him in the new Fire Station #1 that was completed several years ago. Joe was preceded in death by his brother John Woerner and step son Richard Allen. Survivors include his wife Joyce Sease, daughters Joann Sease and Nancy Huff, brother Howard Woerner, sister in law Peggy Kuykendall, grandchildren Taylor Huff, Drew Huff and Ryan Allen, along with numerous nieces, nephews, great nieces, and great nephews. Services are to be Saturday March 18 2017, 11:30 A M at LaPorte Community Church with interment to follow at Grand View Memorial Park officiated by Rev Brian Christen. Family will receive friends Friday the 17th at the Funeral Home from 5 P M to 7 P M.