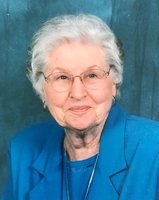 Charlyne met her husband of 61 years, Ras, in Hot Springs, Arkansas, after he had just returned home from war. Six weeks after they met, June 15, 1946, she was married to the love of her life.

Also known as “Rosie the Riveter”, Charlyne spent time welding on ships during World War II. In 1950, her and Ras moved to Houston, Texas to find work, where she spent 25 years as a telephone operator with Southwestern Bell before retiring and moving back to Arkansas in 1980. In 2001, they decided it was time to move to Pearland, Texas so that they could be closer to their family. Charlyne was strong in her faith and her trust in the Lord never waivered. She was an active member of the Pearland Church of Christ and devoted her life to the Lord. She will be greatly missed by all who knew and loved her.

In lieu of flowers, the family requests donations be made in Charlyne's honor to the Pearland Church of Christ, 2217 S. Grand Blvd., Pearland, Texas 77581.

Services for Charlyne will be held Saturday, November 24, 2018 at Clayton Funeral Home, 5530 W. Broadway, Pearland, Texas 77581.  The visitation will be held from 2:00 until 3:00 pm with the funeral service following at 3:00 pm in the chapel with Justin Gonzalez officiating.  A private family interment will be held at Houston National Cemetery.