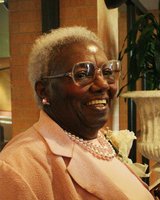 Doris Marie Ward, the eldest daughter of four children born to Samuel and Gladys Edwards.  The Edwards resided in Monroe, Louisiana where Doris was a student at Monroe Colored High.  The Edwards were faithful servants for many years at China Grove Baptist Church.  The family later moved their membership to Solomon Temple Baptist Church.

Although Doris was a devoted wife and mother, she was independent - believed in hard work and she desired to contribute more to her family.  Doris joined the domestic workforce where she was employed for many years.  She later became a physical therapy assistant at St. Anthony’s where she remained until her well-deserved retirement.

Despite her retirement, Doris still had a very active social life and had a host of best friends, which included Cliftine Pettie (Houston, TX, deceased), Lucille Lucas (Houston, TX), Nathaniel White (Houston, TX), Willie Garrett (Houston, TX), and her lifelong friend Hazel Hughes (Monroe, LA).  Doris was a civic minded citizen and was immersed in following national and local politics.  She also assisted in her local community by providing meals to some of her neighbors.

On September 7, 2019, Doris transitioned from earth-side to glory where she was completely healed.  She is preceded in death by her parents Samuel and Gladys Edwards, sisters Glenda Edwards-Wilson, Linda Gray-Williams, and brother-in-law Johnny Slack, Sr.