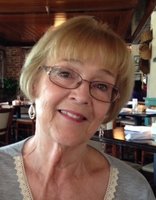 Judith “Judy” Way, 75, of Friendswood was born on December 30, 1943 in DeRidder, LA to Edward Welch Robinson and Fannie Rose McFarlane Robinson and passed away on Thursday, October 3, 2019 with family by her side.  She was preceded in death by her parents and grandson, Grayson Pearson.  Left to cherish the memory of Judy are her husband of 54 years, Charles N. Way; son, Charles “Chuck” Way; daughters, Jennifer Shaffer and husband, Keith, Amy Pearson and husband, Greg; sister, Peggy Peacock; grandchildren, Drew Matura, Camille Shaffer, Adam and Emily Pearson as well as numerous other family members and friends.

Judy graduated from Jesse H Jones High School in 1962 and then attended the University of Houston.  She met and married the love of her life Charlie Way on June 4, 1965, and they had three children together.  Once they started building a family, she decided to stay home and raise the children.  She considered her grandchildren her greatest gifts.  She spent as much time as she could with them, caring for them, reading to them, teaching them to bake, cooking for them, and attending any and all functions and events they were involved in.  She was a devout Christian and enjoyed volunteering at church and in her community.  Judy always enjoyed hosting holiday events and entertaining the masses.  She also loved to invite family and friends to her house for fun in the sun, water sports and a delicious meal on any given weekend.  Her favorite career was being a travel agent, as she loved to travel as well as plan vacations for others to enjoy.  She was an avid Aggie fan and loved attending football games at Kyle Field, and when she couldn’t be there in person, she would watch them on T. V. She enjoyed shopping for Aggie gear at the bookstore, as it was a tradition for her to give the guys brand new Aggie shirts each football season.

A celebration to honor the life of Judy Way has been set for 1:30 PM on Monday, October 7, 2019 at Clayton Funeral Home Chapel, 5530 W Broadway, Pearland, Texas 77581.  Visitation will also be at the Chapel from 12:30 pm until service time.  Burial will follow at Southpark Cemetery in Pearland.  The bearers of the bier have been chosen and they are Keith Shaffer, Drew Matura, Greg Pearson, Robert Way, Chuck Way, and Jeff Pearson.  The honorary pallbearer is Adam Pearson.