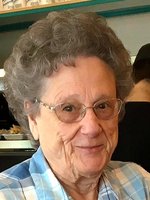 MINNIE SUE HOWARD WILKERSON, was born June 22, 1935, Farmersville (Collin County) , TX, to Gerald Alden and Mahaley (Shelton) Howard. She died on March 7, 2020 in The Woodlands, Texas. Sue attended Farmersville Elementary and Texas City High School, where she participated in DE and worked in the banking field. She graduated from Texas City High School in 1953. Sue met the love of her life, Walt Wilkerson in 1954 in Texas City. They were married June 8, 1955 in the First Baptist Church of Texas City and were the first couple to be married in the new church building. Shortly thereafter, they moved to Abilene, TX & lived there 12 years. Sue worked at the First National Bank of Abilene. She was active with Walt in Optimist International & in the Ham Operators’ Club. Their two children, Julia Charlene & Edward Earl “Eddie”, were born in Abilene. In 1967, the family moved to Pasadena, TX and Sue went to work for the Harris County Tax Office. In 1978, Sue, Walt, & Eddie moved to San Antonio, TX, and she went back into banking for several years, then joined Walt as he managed a wholesale parts house, Electrotex, for 23 years. Retiring in 2000, Sue and Walt moved to La Porte, Tx to be near their children and grandchildren. Sue enjoyed sewing, square dancing, movies, games, & developed a love and passion for genealogy that lasted until her death. Sue and Walt loved monthly meetings with their high school friends and classmates from Texas City High and Galveston Ball High. Sue was awarded an honorary diploma from Galveston Ball High for her contributions to the history of the school and her lasting friendships with Ball High classmates. Sue is survived by her daughter, Charlene and husband Brad Burton, her son Eddie and wife Wanda Wilkerson, her grandchildren, Amber and husband Scott Lausch, Blake Burton, Chris and wife, Lindsay Wilkerson, and Kyle and wife, Mandy Wilkerson. She loved showing off her great grandchildren Riley Lausch, Alyssa Lausch, Aiden Wilkerson, Brianna Lausch, Aria Wilkerson, and Alana Wilkerson. She is also survived by numerous nephews, nieces, relatives, and close friends. A memorial service for Sue Wilkerson has now been POSTPONED and will be held at a later time to be determined at the Clayton Funeral Home Chapel 201 South 3rd Street, La Port, Texas 77571.