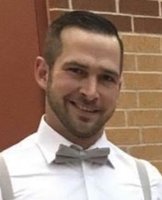 Daniel Earl Hundley Jr. of Pearland, Texas, passed away unexpectedly on Sunday, April 19, 2020 at the age of 30 while at his home. Daniel is survived by his children, Emery, Lucas, and Aria; his mother and step-father, Joan Antinori Belknap and Billy Belknap; his siblings, Jerret Gomez, Jason(Angela) Gomez-Antinori , and Justin(Ashley) Gomez; his step-siblings, William Belknap Jr. and Kirsten(Michael) Iannotti; nieces and nephews, Destiny, Skye, Lilyana, Rowynn, Wyatt, Maximus, Liam, Abby, and Emma. He was preceded in death by his father Danny Earl Hundley Sr. in 2018 at the age of 65. Daniel was born in Phoenixville, Pennsylvania on September 10, 1989 to parents Joan Antinori Belknap and Danny Hundley. Destined to spread infectious laughter and touch the hearts of many he spent his early years living in Tabor City, North Carolina where he developed his natural ability for sports and love of baseball. From there he headed further south to Pearland, Texas where he graduated from Pearland High School in 2007. During his time at school he excelled as a leader in the FFA program inevitably serving as FFA President in 2007. After graduation, Daniel pursued a career in construction with Belknap Builders. While being able to create anything he could imagine with his hands, his career was only a means to pay the bills. His real passion was entertainment. This became apparent within the first few minutes of meeting him. No one can ever say that when they were around Daniel, the time spent wasn’t full of jokes and laughter. Whether it was through showing off his axe throwing skills, singing, dancing, or ad-lib comedy routines, Daniel went out of his way to put a smile on the faces of those around him. The only thing he loved more than bringing joy to others was being a father to his three children Emery, Lucas, and Aria instilling in them his affectionate and outgoing personality. He will be missed by countless friends, family members, and all who had the pleasure of laughing alongside of this man who truly knew how to enjoy life. Donations may be made to the GoFundMe campaign for Funeral Expenses and financial help for his children https://www.gofundme.com/f/funeral-expenses-amp-financial-help-for-his-children