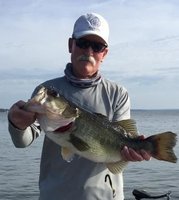 Barry Lane Johnson was born on April 11, 1950, in Lufkin, Texas son of the late Carl Clinton Johnson and Marie Johnson, and entered the gates of heaven on Sunday, May 31, 2020. Barry’s motto for life was “huntin, fishin, and lovin every day. He was affectionately known as “Honey or Precious”, “Little Brother” ,” Ole Man”, “Barry Lane” and “Beretta”. He loved his family, friends, country and God. He was proud to be a Navy Veteran and Honored Member of the Crew who Served Aboard “TOPGUN” at the time of Establishment. Barry retired from Dril-Quip after 32 years of service. He was a tough but fair manager who ran a tight ship and tried to instill work ethic and honor in all who would listen. He was always willing to teach anyone about hunting, fishing, and firearms. He never turned down anyone in need and was the truest friend anyone could ask for. Barry is survived by his wife, Susan Terrell Johnson of Pearland, TX; son, Clint Johnson of New Caney, TX; step-daughter, Cassandra Terrell-Burleson of Denver ,CO.; sister and her husband, Sherry and Terry Elter of Natchitoches, LA.; brother-in-law, Stephen DeVine of Lufkin, TX. and a number of nieces, nephews and numerous very dear friends. He was preceded in death by his mother and father, Carl C. and Marie Johnson; and sister, Joni K. Johnson. Services for Barry will be held Saturday, June 6, 2020 at The Little Country Church, 22152 Baptist Encampment Rd., New Caney, Texas 77357. The visitation will take place from 9:00 until 10:00 am with the funeral service beginning at 10:00 am with Pastor Jerry Hovater officiating. Interment will follow at Garden of Memories Memorial Park in Lufkin, Texas.