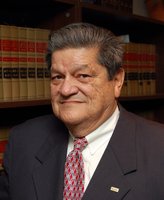 Judge Ruben Guerrero, a San Antonio native who made Houston his home, passed from this life on Thursday, August 27, 2020 after a series of health problems. He is preceded in death by his wife, Mary Guerrero, who died just nine months ago, parents Moses and Maria Guerrero, and brother Moses Jr. He is survived by daughter Yvonne Mintz and husband Ryan of Rosharon, daughter Rebecca Pilkey and husband Lloyd of San Antonio and three grandchildren he adored, Mia Mintz, Justin Mintz and Angela Pilkey. Also mourning his passing are sisters Lydia Munoz and Velma Perez and husband Pete, of San Antonio, many beloved nieces, nephews, cousins and friends. Ruben was born April 13, 1946 in San Antonio. He served as a supply sergeant in the United States Air Force in the Vietnam War. First in his family to graduate college, he earned his undergraduate degree from the University of Houston and law degree from Texas Southern University. He practiced criminal law, and in 1992, Gov. Ann Richards appointed him to serve as Judge of the 263rd State District Court. He later was appointed Regional Director of the Small Business Administration, leading 10 SBA offices in Texas, Louisiana, Oklahoma, Arkansas and New Mexico. In 2008, the citizens of Harris County elected him Judge of the 174th State District Court. He retired in 2016. He loved the law, and his time on the bench was the highlight of his career in public service. He met many of his best friends through his work, the kind who stuck beyond the time he carried influence in the courthouse. He presided over his court with toughness and compassion and took joy in mentoring young attorneys. He was a fair and kind man, quick with a joke, eager to pick up the lunch tab and never afraid to speak his mind. He loved people, musicals and westerns and talking politics. He never went anywhere his children were not invited and bragged about his family to anyone who would listen. He served on the boards of the Harris County Facilities Corporation and the Youth Victim Witness Advisory Board, was past president of the League of United Latin American Citizens Council 60 and the American G.I. Forum of Greater Houston and past chairman of the State Bar Grievance Committee and the Harris County Criminal Lawyers Association. Funeral mass is set for 10 am Wednesday, Sept. 2 at Most Holy Trinity Catholic Church, Angleton, and available for livestream on the church’s Facebook page. Interment of ashes will follow the next day, at 10:45 am Thursday, at Houston National Cemetery, 10410 Veterans Memorial Drive. Services are open, but health and safety are important to us, so please do not feel obligated to attend. Social distanced church capacity is 125, with masking required. Regretfully, due to COVID-19 concerns, there will be no reception following mass. The family hopes to throw a celebration of his life next year. In lieu of flowers, consider donations to the University of Houston Alumni Association for a scholarship in Judge Guerrero's name. Make checks payable to UHAA, with Hispanic Alumni Association in the memo line. Mail to 3204 Cullen Blvd, Suite 201, Houston TX 77204, or go to bit.ly/34T92Ip for online donations. The family wishes to thank the staff of Country Village Care in Angleton for their loving care during the most trying of times. Arrangements by Clayton Funeral Homes, Pearland, Texas.