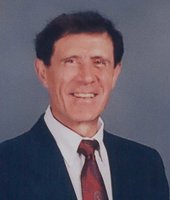 Alfred Cavallaro, 93, passed away Friday, October 2, 2020 surrounded by his family. He is preceded in death by his parents, Joseph and Rosa Cavallaro; his loving wife of 59 years, Lucy Cavallaro. Left to cherish his memory are his son, Joseph Cavallaro and wife, Ann-Marie; sister, Marie Mannino; brother, Mario Cavallaro and wife, Eileen; grandchildren, Emilia Cavallaro and Frederick Cavallaro; and a host of other family and dear friends. Alfred had a successful career as a registered architect in Pennsylvania for many years. He was responsible for designing many of the shipyard facilities. Born in Philadelphia and raised in Italy, Alfred completed his architectural studies at Temple and Drexel Universities. He was an excellent provider for his family and instilled a strong work ethic in his family. Alfred proudly served his country in the United States Army but later designed the facilities for the US Naval Shipyard in Philadelphia. To his close friends and family, he was known as “Fred” and to his coworkers and colleagues he was “Al”. In his later years, Alfred enjoyed researching his genealogy and writing his memoirs. He maintained a close relationship with his siblings throughout his life and through his genealogy research developed a special bond with cousins and distant relatives in Italy and Australia. Alfred loved the outdoors and could be found many mornings in his garden. Like his father he had a green thumb and grew beans, eggplants, and lemons like few others. He and Lucy were avid animal lovers and he had a special affection for his parakeet, Polly. He was affectionately known as “Grandpa” to his grandchildren, and after moving to the Pearland area, cherished spending more time with them. Alfred will be greatly missed by all who knew and loved him. Services for Alfred will be held Wednesday, October 7, 2020 at St. Helen Catholic Church, 2209 Old Alvin Rd., Pearland, Texas 77581. The visitation will be held from 9:00 until 10:00 am with the funeral mass following beginning at 10:00 am with Father Jim Courville officiating. Services will be live-streamed by St. Helen at www.sthelenchurch.org/index.html. Interment will follow at Houston Memorial Gardens in Pearland, Texas. In lieu of flowers, donations may be made in Alfred's honor to the American Cancer Society, www.cancer.org/.