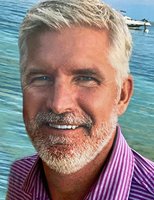 Timothy Kent Dagley, age 52, was born in Tennessee on June 2, 1968 to two loving parents who had prayed long and hard for their firstborn child. He and his two younger sisters were raised in Crystal Lake, Illinois. Tim’s many lifelong friendships began in Crystal Lake. His journey as a Christian also began there at First Congregational United Church of Christ. Tim graduated from Arizona State with a degree in psychology and then received his Masters’ degree in Vocational Rehabilitative Counseling at the Illinois Institute of Technology in Chicago. While living in Chicago, he was set up on a date with Angela Rowland, who would become his wife and partner in life in 1998. Together with Angie, they built their lives in the Houston, Texas area where Angie’s family and friends, quickly became Tim’s. They would eventually have a family of their own with Kyle and Jeremiah. Tim was a lover of sports and was a diehard Cubs fan who rejoiced in 2016 when they finally won the World Series. Tim was often lovingly called ‘Rainman’ by his family because of the ridiculous amount of sports trivia he held in his brain. He was also an incredible athlete who excelled at tennis and baseball, to the extent that he walked on to Arizona State’s baseball team as a freshman and was being scouted by minor league baseball teams because of his 96 m.p.h fastball. Tim was a gregarious soul with a heart full of good intentions. He sought comfort in his faith and religion. He was known for being an outgoing godly husband, father, friend, and coach in his church community. Tim, along with Angie, were mentors and pastors to many throughout their lives together. He frequently combined his passion for sports with his ministry. Tim created the Wheelhouse Baseball School to provide a faith-based, after school program for young athletes. In more recent years, he was an active volunteer and participant in various GolfReach events where he combined his love of golf with ministering to others. Tim was also a familiar face to many in his sons’ school community at Lutheran South Academy. One of Tim’s most challenging, yet loving roles in life, was being a steadfast champion and caregiver to his wife, Angie, during her battle with breast cancer until she was called home on March 31, 2019. In the last year of his life, Tim found love and joy with his second wife, Melissa Chamberlain, and expanded his family once more to include her three adult children. Tim and Melissa set out to start a new life to celebrate their love and share their faith and love of God with others. While their love was strong, the celebration of that love was cut short, as they fought a quiet battle along with close family and friends to lift Tim up as he descended into the darkness of his own challenges with depression and mental illness. Despite being loved and cherished by so many who were fervently praying for him and desperately helping him access the treatment he needed, Tim lost his battle with his depression and mental illness when he ended his own life on October 6, 2020. Tim’s lifelong partner and wife, Angie as well as his beloved mom, Ann Dagley, are greeting him in heaven with open arms ready to wrap him in love, comfort and peace. Tim left behind his two sons, Kyle and Jeremiah Dagley; his second wife, Melissa Chamberlain and her children Kaitlin, Ryan and Jake; his father, Larry Dagley, and his wife, Barbara; his sister Kristen Balow and her family, Tony, Taylor and Carter; his sister, Allison Lee, and her husband, Dennis; his step-sister Ellen Schneider and her partner Mike; his mother-in-law, Diane Folsom Rowland, his sister-in-law, Becca Rowland Withey, and her family Mark, Lily, Hunter, and Torin, as well as a vast extended family of cousins, loved ones and countless number of friends from the various paths his life has taken him throughout the years. A Celebration of Life Service for Tim will be held at Crosspoint Church, 1134 Old Alvin Rd, Pearland Texas, on Wednesday, October 14, 2020, at 2:00 pm. *Due to Covid-19 precautions and requirements, masks are required. Seating will be limited. https://livestream.com/crosspointchurchtx/events/9348993 In lieu of flowers, please make donations to the National Alliance on Mental Illness at https://donate.nami.org/give/197406/... For anyone struggling with thoughts of suicide please reach out to someone or call the National Suicide Hotline: 1-800-273-8255