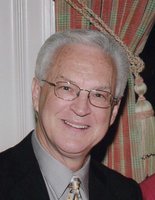 Dwight Lymon Martin, 81, stepped into heaven on Saturday, October 10, 2020. He spent most of his adult life as a pastor in Texas and Kansas. After retiring from the ministry, he spent 20 years as an IT networking trainer teaching commercial computer networking software operations to corporations across the country. He graduated from Wayland Baptist University with a BA in History and from Southwestern Baptist Theological Seminary with a Master’s Degree of Divinity. He also completed all course work for a Ph.D. in Biblical Studies from Southwestern Seminary. He pastored Baptist churches in Stephenville, Texas; Garden City, Kansas; Hico, Texas and Carrollton, Texas. His corporate IT training work was based out of Dallas and he spent the last 15 years of his retirement with his family in Houston. During his retirement, he authored three books on Biblical Eschatology and enjoyed spending time with his wife of 57 years, Vena, his two children, Chris and Geniffer, and his 9 grandchildren. He is preceded in death by his parents, Willard and Mildred Martin; an infant brother, Michael Martin; his three sisters, Loretta Ritchie, Brenda O’Brien, and Shelby Killen; and a grandson, Samuel Roach. Left to cherish his memory are his loving wife of 57 years, Vena Lou Martin; son, Christopher W. Martin and wife, Natalie; daughter, Geniffer L. Roach and husband, Mark; grandchildren, Cameron Roach and fiancé, Katie, Joshua Martin, Collin Roach and wife, Katy; Hannah Hundley, Evan Roach, Cody Hundley, Caroline Roach, Elizabeth Martin, and Erin Roach; his nephew, Mike Ashworth and wife, Kristie; his brothers in-law, Kerry Killen and Denny O’Brien; brother-in-law and sister-in-law, Louis and Patty Heflin; and a host of other family and dear friends. A Memorial Service for Dwight will be held at Houston’s First Baptist Church on Friday, October 16, 2020 at 11:30 a.m. The inurnment with military honors took place prior to the memorial service. In lieu of flowers, the family requests that donations be made in Dwight’s honor to Houston’s First Baptist Church Pre-school Ministry or a scholarship fund in his memory has been established at Dallas Theological Seminary for the continued training of those entering pastoral ministries. To make a gift of any amount in his memory, contributions can be sent to Dallas Seminary Scholarship Fund; Advancement Office; 3909 Swiss Avenue; Dallas, Texas; 75204. The gift should be noted: In Memory of Dwight Martin.