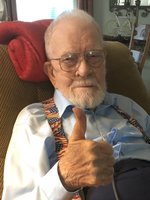 Frank Milton Leonard, 94, passed away Thursday, November 5, 2020. He is preceded in death by his father, Ralph Leonard; his mother and stepfather, Lucille and Otis Bud Saunders; his loving wife of 72 years, Cecilia Leonard; and son, Richard Leonard. Left to cherish his memory are his son, Michael Leonard; daughters, Susan Davis, Pamella Rose Harger, and Connie Pepin and husband, Arne; six grandchildren, eleven great grandchildren, one great -great grandchild, and a host of many other family and friends. Those who knew Frank best would describe him as generous, courageous, outspoken, faithful, strong-willed, a true patriot and – above all – a devoted family man. Having had 94 years on this earth, and being fully immersed in all that life has to offer, Frank had an endless supply of experiences to share and was truly a master story teller. Music and theatre had a profound influence on Frank from a very early age. A favorite story of his … “My acting debut came when I was almost 4 months old in St Helens, Oregon. I was cast as Baby Jesus for a community Christmas play! My momma said the audience was surprised that Jesus was ‘a real live baby’ and so well behaved!” Frank played the violin during his formative school days and he’d be quick to tell you “it kept me out of a lot of trouble”. A great deal of Frank’s early childhood was spent in the company of his grandparents, who launched the creation of a family homestead in western Montana in the 1920’s. It was there that he grew to love and cherish the breathtaking beauty and bountiful nature of Big Sky Country. Frank graduated from Pasadena High School in 1943. Following his service as a US Merchant Marine during WWII, Frank’s days became even more rich when he met and married the love of his life, Cecilia, in Alabama in 1947. He subsequently went to work for Shell Oil Company at the Deer Park refinery and he and Cecilia settled in Pasadena, Texas, to raise their family. During the next several decades, Frank was not only a hard worker and faithful provider, he actively involved himself in his community – including, but not limited to - the Deepwater Optimist Club, the Rotary Club, the local Elks Lodge and coaching little league baseball. Frank was also very interested and involved in politics at every level. He was active during the Civil Rights Movement of the 1950’s as he rallied for equal pay for the men who worked with him at Shell. After 40 years of employment, he retired from the Deer Park refinery as Supervisor of the Central Power System. In the late 1990’s, when Frank was about 72 years old, he began seriously researching his family’s ancestry. Through a profound gift from his grandchildren, Pawpaw started a whole new life chapter as he learned how to use a computer for the very first time. Frank became intent on documenting his family history and shared all that he discovered with his “tribe” (the family he cherished). He even wrote down many of his own life stories … what a treasure! His signature trademark were the red/white/blue USA flag suspenders that he wore every single day. As a product of America’s Greatest Generation - Frank was an unwavering believer in the absolute privilege of the “freedom to live and thrive in the world’s greatest nation”. Frank insisted that in order to honor such a heritage, it is every American citizen’s patriotic duty to “Educate yourself about the accomplishments of leaders in local/state/federal government and, for God’s sake – VOTE! Seek the truth, not just opinions. And if you decline to put your God given skills/talents to good use and you refuse to be a responsible productive member of society, then you have no right to demand any reward. No one ‘owes’ you anything!” A Memorial Service for Frank will be held Monday, November 30, 2020 at 11:00 am at Clayton Funeral Home, 5530 W. Broadway, Pearland, Texas 77581 with Chaplain Rogers Thomson officiating.