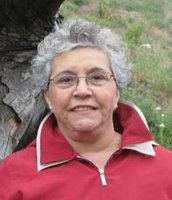 Petra Nicholas, 79, beloved wife, mother, sister, aunt and friend, died unexpectedly on November 10, 2020. Petrita, as she was known to her family and friends, was born on the beautiful Caribbean island of Puerto Rico on December 13, 1940, to Jose and Petra Medina. On one fateful trip to Texas, she met a man who swept her off her feet—Leonard Nicholas. They were married in Puerto Rico on Oct. 24, 1964. Petrita lived a full life as a devoted wife, mother, floral designer, church volunteer, and finally, doting grandmother (Abuela). Petrita was a founding member of St. Luke the Evangelist Catholic Church, where she spent 40+ years living Christ's calling to be His hands and feet on Earth. She volunteered her time and talents with various ministries, especially those that helped the elderly, helpless and less fortunate. She was a long-time member of the Catholic Daughters of the Americas. As any native Puerto Rican will attest to, she loved a good party--believe us when we say she had many funny stories of being a beautiful, young, single woman on a tropical island--so she was always helping the Celebration committee at St. Luke. She had a zest for life that translated into a love of travel, whether it be road trips all over the southern US with Leonard and the kids in the family station wagon, renting the RV to head to the mountains of New Mexico, hopping on planes to Europe, or sailing the seas in style. She loved it all and never met a stranger. Her penchant for talking to anyone and everyone embarrassed her young kids to no end. Little did they know they would turn out the same way. Her daughters treasure the memories of her years as their Girl Scout troop leader. She made sure her girls were exploring, learning, creating and enjoying their childhood. Even though she was working as a floral designer when her son was young, she made sure he was given the opportunity to travel and she saw to it that he was involved in sports so that he could find his passion. When she saw his love of computers, she supported him whole-heartedly. Petrita is survived by her husband of 56 years, Leonard Nicholas; children Eileen Nicholas, Suzanne (Jason) Levy, and Kevin (Danielle) Nicholas; grandchildren Jessica and Nicholas Levy; sisters Gloria Konig, Mercedes (Orestes) Arroyo, and Elba Medina, sisters-in-law Eneida Cano and Justina Medina, and an extended family of nieces, nephews and cousins. Preceding her in death are her parents, Jose and Petra Medina, brothers Harry, Miguel and Cheo Medina, and brother-in-law Charles Konig. The visitation will begin at 10:00 am with a rosary scheduled for 10:30 am on November 18, 2020, followed at 11 am with a funeral service at Clayton Funeral Home, 5530 Broadway St., Pearland, TX 77581. In lieu of flowers, please donate to the charity of your choice on behalf of Petrita. Petrita, mom, hermana, Titi…we love you and miss you. We know you are having a party in heaven with your parents and brothers; we can hear the salsa music and laugher from here! P.S., that iPad you ordered, it finally arrived.