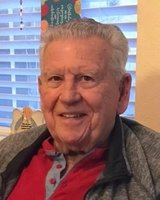 James Roy Sitton, 88, passed away peacefully at his home on January 6, 2021, after a brief illness. James was born in Anson, Texas. He is preceded in death by his loving parents John and Erma Sitton and brothers Harold and Ronnie Sitton. Left to cherish his memory are his loving wife of 64 years Sammie Jones Sitton, daughters; Sindy Lou Sitton Barnett and Sonja Lea Shannon and husband Michael, brother; Doyle Sitton, Sisters; Sandra Parish, and Terecia Gostecnik, grandchildren; Deric Barnett, Travis Barnett and wife Brittney, Whitney Barnett, Shelby Matczak and husband Christopher, Sarah Garrett and husband Daniel, great-grandchildren; Kody, Keilan, Macie, Wyatt, Brenna, Malia, Tripp, Tomasz, Jerome and James, and a host of other family and friends. James met Sammie Jones while he was playing basketball for Stephen F. Austin State University. That meeting began a relationship and marriage that spanned sixty-four years. After graduation James served in the United State Marine Corps at Camp Pendleton. James returned to Texas where he was a Teacher, Coach and Principal in the Center and La Porte Independent School districts for thirty years. In his spare time he coached girls and boys softball and basketball. James loved cars, especially working on Classic Ford Mustangs. His love for sports also included cheering for his favorite baseball teams the Yankees and Astros. In his later years he loved spending time outdoors riding on his tractor and camping with his family. James was very devoted to Jesus, and his church. He was a member and Deacon at the First Baptist Church of Pasadena. In Lieu of flowers a Memorial Fund has been set up in James’ name at the Early Texas First Baptist Church in Early TX to send local children to a Youth Sports Camp. Call to make a donation, 325-646-6596. If you’d prefer, you may also donate to any Youth Charity of your choice. A private family graveside service for James will be held at Houston National Memorial Cemetery on Tuesday, January 12th. A memorial service will be planned at a later date for friends and extended family.