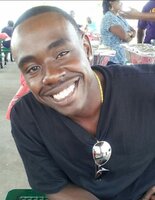 Michael Earl Riley, 37, passed away Tuesday, October 5th, 2021. He is preceded in death by his father, Michael Earl Taylor; grandparents, Joan Riley, Opher and Brenda Mitchel, and John and Rubijewel Taylor. Left to cherish Michael’s memory are his mother, Sella Riley; brothers, Darrell Riley (Janatth), Jamaul Langham (Destiny), and Christopher Dupar; sister, Journii Juline; wife, Latasha Nickerson; children, Michael Riley II, Marcel Riley, Makai Riley, and Skylar Riley; nieces and nephews, Darrell Riley jr., Giselle Riley, Santana Riley, Christian Bouton, and Elijahana Riley; along with a host of other dear family and friends. Michael was a free spirit; you could always count on him to light up a room with his big smile. Michael was a family centered man. Nothing was more important to him than being hands on with his children. He loved helping any animal in need and had a caring soul. Michael was a true go getter, and a friendly people person who never met a stranger. He will be greatly missed by all those who knew and loved him.