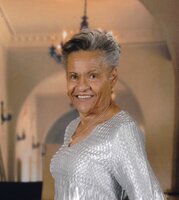 Born February 12, 1936, Lorraine is the first of 13 children born to Chester James Boutte, Sr. and Mary Marjorie Boutte. She peacefully entered into eternal rest and earned her wings on the day of our Lord and Savior, November 25, 2021. Lorraine is survived by her Loving daughter, Gwendolyn (Norman Davis); one son, Paul Sherman Pradier; granddaughter, Bria Lee Davis; 10 brothers and sisters: Carol Shello (George ~ deceased), Brenda Walker (Sammie Lee), Peter Clyde Boutte (Carolyn), Rita Arlene Jolivet (Harold Jr.) all of Houston, TX. Sharon Drexler (Steven), Paul Dwight Boutte, both of New Iberia, La. Loretta Brimmer (Freddie Sr. ~ deceased), Claudette Jackson (Charlie), Jude Kern Boutte (Brenda) all of New Orleans, Louisiana, Edward Malcolm Boutte of Akron, Ohio, and a host of nieces, nephews, other relatives and friends. Lorraine postponed her education to help her parents to sustain the family by working in the crop fields to provide food for a growing family. She worked side-by-side with her father and sometimes in place of her mother in the family home while her siblings were being born. “Lo,” as her family affectionately called her, married Henry Lee Pradier of St. Martinville, Louisiana, on June 15, 1957. Together they had two children, Gwendolyn Ann, and Paul Sherman. Although Henry and Lorraine divorced in June of 1982, they still remained friends and continued to celebrate birthdays and have family gatherings and vacations together into what became a blended family to include Henry’s second wife, Germaine, his second daughter, Erin, four step-children and many grandchildren. While spending the majority of her life working and raising family in New Orleans, Louisiana, Lorraine moved to Pearland, Texas, in the greater Houston area, immediately after losing her home and most of her belongings during Hurricane Katrina in August, 2005. Lorraine’s siblings, family, friends and co-workers alike, were all tickled to say that “Ms. Lo” had a personality and a smile that was contagious with laughter. She made everyone smile even when she didn’t feel well. She enjoyed visiting with family and friends, traveling, and most importantly – living up to her title, “Wild Woman” because of her witty and sassy sense of humor. She was also known to be a kind soul who fed and clothed her family and friends even when they didn’t need it. She loved to cook and host annual 4th of July gatherings, and her favorite staples were spicy seafood cornbread and fried chicken. She made sure no one ever left her home with an empty stomach. Lorraine is preceded in death by her parents Mary Marjorie and Chester James Boutte, Sr., devoted companion, Arthur Tillman, three brothers: John Kinwood (as an infant), Joseph Brindley, and Chester James, Jr.