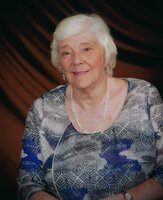 Patricia Leeder Woolcock, 85, passed away Sunday December 19, 2021. She is preceded in death by her parents Frederick and Mary Leeder, her husband Ron, and sister Nancy Murphy. Left to cherish her memory are her sons Scott Woolcock and wife Dian; Daniel Woolcock and wife Stacey; grandchildren Sarah, Christopher and wife Libby, David, and Madeline; great grandchildren Lainey Elisabeth and Matthew, and a host of other family and friends. Patricia was born and raised in Media, Pennsylvania, near Philadelphia. Following high school she attended Penn State University, later graduating from business school. Patricia worked for Gulf Oil, where she met “the love of her life”, Ron. It was a marriage that lasted over 60 years. After a few years, Ron’s job moved them overseas to Iran. It was a time she often spoke of because of the close friendships and traveling experiences they had as a family. Once they returned to the states, they made their home in Houston, where Patricia devoted her time raising the boys. When the boys were older, Patricia went back to work for Gulf Oil which later became Chevron. After many years at Chevron, Patricia retired as an Executive Assistant. She was an active member of Professional Secretaries International and served as President of the Houston Chapter for a time. Patricia cherished her family. She loved cooking their favorite birthday dinners, Christmas cookies, and Sunday meals. In her leisure time, she loved needlework, sailing, and enjoying the outdoors. She especially enjoyed trips to Colorado. Patricia will be greatly missed by all who loved and knew her. A Celebration of life will be held Saturday, January 15 at 2:00 pm at the La Porte Community Church 202 S 1st Street, La Porte, TX. Donations in her name may be made to La Porte Community Church, or the charity of your choice.