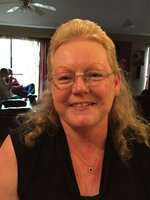 Sherry was born on September 18, 1954, in Wichita, Kansas, to Shirley Marie (Stromset) Kingery and Eugene “Gene” Henry Kingery. Sherry was the oldest of three daughters and is survived by her sisters and brothers in law, Cindy (Bruce) Butterfras and Shelly (David) Wiggins, along with many nieces, nephews, and loved ones in the Langnau and Hurt families. Sherry met her first husband, Greg Langnau, while on a date with another young man. She was immediately smitten. Their marriage lasted 26 years, until Greg’s death in January 2002. Sherry was blessed with two daughters, Angie (Langnau) Rodriguez and her partner Carlos Olivares and Rachel Langnau and her husband Tariq Ali. Sherry was delighted to be a grandmother to three incredible children, Ashley Rodriguez, John Dray, and Elise Olivares. Sherry found love again in her marriage to Darry Hurt in February 2008. Their marriage lasted until his death in 2017. With Darryl, Sherry inherited two bonus daughters and sons-in-law, Darlene and David Henson, and Charyl and Andy Lyons, as well as two bonus grandchildren, Drew and Sarah Lyons. Sherry began her long career at age 16 with the Ken Strum Insurance Agency in 1970. She continued in the insurance and banking business until she returned to school and completed her accounting degree at the University of Houston. With her CPA in hand in 2005, she joined the team at Bruce Hammack, CPA and Company. Although officially retired, Sherry continued to work part time for clients she was devoted to, many of whom became lifelong friends. Sherry was a confirmed Parrot Head, a die-hard Texans fan, a Bunco aficionado, and an active member of First Methodist Church in Deer Park, Texas. She loved the Deer Park Art Players, red wine and shoes, and was up for a party anytime. When at home, you could often find Sherry enjoying an Astros game, a PGA tournament or two, and Mark Harmon and the crew on NCIS. The Jaycees also held a soft spot in her heart. To those who knew and loved her, Sherry will be remembered as a woman who took care of everything and everyone, often thinking of herself last. She was the rock of the family and anchored the family ship in both good and turbulent times. She modeled gentleness, kindness, and calmness, especially during difficult times, which left an impression on everyone’s heart. Please join the family in a Celebration of Life on Saturday, June 18, at 2:00 p.m., in the Sanctuary of Deer Park United Methodist Church. The family will receive visitors at 2:00 p.m., and the service will begin at 3:00 p.m. In lieu of flowers, please consider a donation to the Huntington Disease Society of America at www.hdsa.org