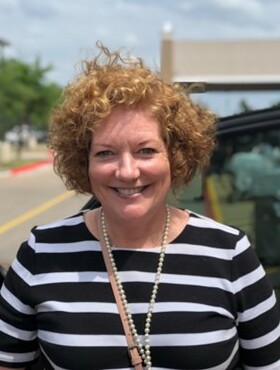 Dr. Lori Cheryl Saunders Broughton was born on June 30, 1960, at Herman Hospital in Houston, Texas to Lynn Clarence Saunders and Carolyn Sue McBroom Saunders. Raised and educated in Baytown, Texas, she graduated from Sterling High School in 1978. Lori received a Bachelor of Science in Education at The University of Texas at Austin in 1982. She married the love of her life, Ben Broughton, on July 3, 1982, surrounded by friends and family at St. Marks United Methodist Church in Baytown, Texas. Her first teaching position was at Crosby Elementary School in Crosby ISD. She moved to Ashbel Smith Elementary in Goose Creek ISD before obtaining a Master of Science from the University of Houston Clear Lake in 1986. After the birth of their daughter, Whitney, in 1987, Lori attempted to retire the first time to spend more time at home. She proceeded to work for the University of Houston Clear Lake and Gloria Day Lutheran Church Vacation Bible School and Sunday School. Six weeks into Whitney attending kindergarten, Lori was asked to join Armand Bayou Elementary in Clear Creek ISD as a third-grade teacher. She worked her way through different positions in the Gifted and Talented department, assistant principal at Brookwood Elementary and gained her first principal position at Silverlake Elementary in Pearland ISD. She began working on a Ph.D. in Psychology at Texas A&M University during her first year as a principal. She graduated in August of 2004. The last 10 years of her career, she led Jamison Middle School in Pearland ISD, and McWhirter Elementary in Clear Creek ISD. In 2010, Lori and Ben began planning for retirement when they purchased property outside of Dripping Springs, Texas. The B Lazy 7 Ranch began as an 800 square foot barndominium. Lori retired in 2014 from Westbrook Middle School in Clear Creek ISD as plans for the family home were being finalized. Since 2021, Lori has been mentoring future teachers in the Austin area through a program called Teachworthy.

Lori organized her life and home so that positive and uplifting achievements were evident. She strove to model how to succeed professionally while maintaining adventure, family, and laughter. She pushed herself to be in social situations, and people always walked away inspired with her knowledge, or feeling confident due to a compliment or story Lori would share.  She will forever be remembered for her smile that showed her love of others and most importantly, our Lord God.

She is survived by her husband Ben and daughter Whitney. Her father-in-law and mother-in-Law, Ben and Karen Broughton. Her sisters, Kimberly Saunders and Amy and George Tapp. Brother-in-law Jay and Viridiana Broughton. Sister-in-law Jeani and Robyn Haak. Nieces Jessica Tapp, Ashley Broughton and nephew Wesley Tapp.

In lieu of traditional remembrances the family has chosen to create a scholarship fund to honor Lori and help support future teachers in the Austin area through Teachworthy. Donations can be made through the QR code or checks and donations can be sent Attention To: Dr. Lori Broughton Scholarship Fund; 100 Commons Road, Suite 7-115, Dripping Springs, Texas 78620.