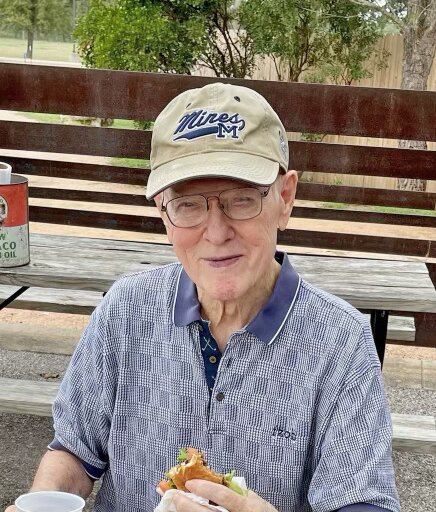 Please share a memory of Robert to include in a keepsake book for family and friends.
View Tribute Book
Robert Goodwin, 91, passed away Tuesday, May 10th, 2022. He is preceded in death by his parents Wesley Hiram and Ruby Sims Goodwin; wife, Lillian Mae Luksa Goodwin; daughter, Carol Mayes; and brothers, James Goodwin, and William Goodwin. Left to cherish his memory are his sons Mark Goodwin and wife Jonelle, John Goodwin and wife Robin; grandchildren, Bryan, Tyler and wife Bonnie, Austin and wife Whitney, Mason and wife Cidney, Lillian, and Emily; great grandchildren, Bryleigh, and Sloane; and many other dear family and friends. Robert graduated from Ennis High School in 1948. After graduating, he proudly served his country in the United States Air Force. Following his service in the Air Force, Robert earned a degree in Engineering from the University of Texas. In July of 1958, he married the love of his life Lillian Mae Luksa. In the early years of his career Robert worked in Seattle, Denver, and Arlington. He finally settled in Pasadena, Texas and went to work for Lockheed Martin where he retired after 27 years. After retiring Robert moved to Sun City in Georgetown. He enjoyed his retirement there and loved playing golf and bike riding with his friends. While in Georgetown Robert joined the First Baptist Church where he made many close friends over the years. In the final few months of his life, he moved to La Porte to enjoy time with his family. He will be truly missed by all who loved and knew him. A visitation for Robert will be held on Friday, May 13th, from 6 to 8 pm, at Clayton Funeral Home of La Porte. (201 S. 3rd St., La Porte, Texas, 77571) The following day, Saturday, May 14th, a graveside service will take place at the St. Joseph’s Cemetery in Ennis, Texas.
Friday
13
May