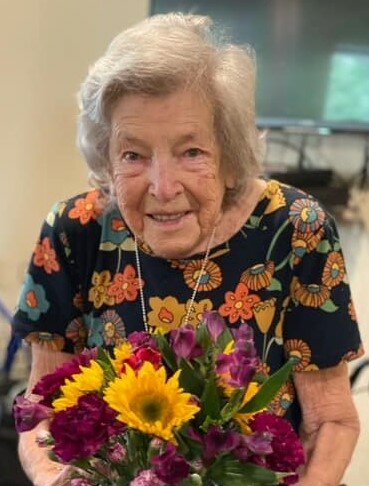 Please share a memory of Ruth to include in a keepsake book for family and friends.
View Tribute Book

Ruth Celeste Friedeman Rosser, aged 90, died peacefully in her sleep on September 30, 2022.  Ruth was born in Salem, NJ on May 24, 1932, to Albert Friedeman and Augusta Spaulding Friedeman. Ruth married John Rosser in 1953, and they were happily married for 68 years, until John passed in 2021. Primarily a homemaker, Ruth also held a number of jobs over the years, including working for Dupont Chemical, working retail during the Christmas seasons, as well as working in the cafeteria at Maclary Elementary in Newark, DE.  She found a love of painting in the 70’s and pursued a Bachelor of Arts degree at the University of Delaware.  After a transfer required the family to relocate to Houston in 1981, Ruth continued to paint and sell her items at various art shows. While in Houston, she worked as a teacher at the University Baptist Church Mother’s Day out program and was very active within the church.

In 1997, Ruth and John returned to their beloved Stone Harbor, NJ, where they had originally met. Becoming members at First Baptist Church of Cape May Court House, Ruth was an avid volunteer for various programs, and she also volunteered at Stone Harbor Elementary. In addition to swimming and painting, Ruth was very devoted to her family and loved playing hostess for family summer vacations to her house at the shore. One of her greatest joys was taking her grandchildren to places of interest in the Philadelphia area.  After spending 23 years at the shore, she and her husband returned to the Houston area in 2020.

Share Your Memory of
Ruth
Upload Your Memory View All Memories
Be the first to upload a memory!
Share A Memory
Send Flowers