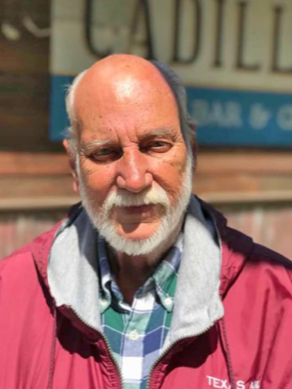 Charles (“Charlie”) Way passed away peacefully on October 31, 2022, in Friendswood, Texas, with his family by his side.

Charles Norman Way was born on May 16, 1942, in Houston, Texas, to his mother Ellen Norman and biological father, Abden David. Later in childhood, he was adopted by Ellen’s husband Delbert Way.  Charlie grew up in the Garden Villas neighborhood in Houston, and graduated from Jesse H. Jones High School in 1961.  After graduating from high school, Charlie attended Texas A&M University, and was a proud member of the Fightin’ Texas A&M Corps of Cadets, Squadron 2.  Charlie graduated as a member of the Class of 1965, with a degree in Accounting.

In June of 1965, Charlie married Judy (Judith) Ann Robinson, and they started their life together in Houston.  Charlie began his career at Texaco Oil as an accountant, and after gaining experience, moved on to work for Tenneco and a number of other companies.  During this time, Charlie and Judy welcomed their first daughter, Jennifer Lee, into their lives.  This was only the beginning of their family, as Charlie and Judy welcomed the addition of Amy Nell, and Chuck (Charles Norman Way II).  With the exception of a short time living in Georgia, Charlie and the family called Texas home.  They spent several years in The Meadows, several in Bay City, and many in Sargent where Charlie and Judy finally retired so that Charlie could be on the water and enjoy fishing and boating.  Charlie’s retirement as CFO of Evans Oil Company did not last long, and soon he opened Way Insurance Agency that he operated for many years until finally retiring so that he and Judy could move closer to family.

In the early 1990s, Charlie was fortunate to rekindle a relationship with his biological father, Abden David.  Abden re-married Ellen after Delbert had passed away, and Charlie and the family were able to spend time getting to know Abden.

League City, Texas and a host of other family members.

Charlie was preceded in death by his wife of 54 years, Judy; and his grandson Grayson Pearson.

In lieu of flowers, the family requests that donations be made to the Cholangiocarcinoma Foundation at cholangiocarcinoma.org in honor of Charlie and the love he had for his wife Judy.