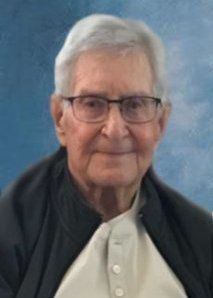 Richard was drafted into the Army where he served in World War II. His trade and skill was being a boilermaker/ welder. He retired as a boilermaker in 1988 with Steel Tank. Richard was a member of The Church of Christ in La Porte.

Richard enjoyed spending time outdoors, fishing, barbecuing, and gardening his perfect tomatoes. He loved to sit in his swing or out in the sun. I don’t think the Houston Astros has a bigger fan than him. When telling a story, he would always start out with a little chuckle or giggle. Richard was a very sweet man who would give you the shirt off his back. He will be greatly missed by all who knew and loved him.

In lieu of flowers, the family asks that donations be made in honor of Richard to The National Kidney Foundation.

“Do not let your hearts be troubled. You believe in God; believe also in me. My Father’s house has many rooms; if that were not so, would I have told you that I am going there to prepare a place for you? And if I go and prepare a place for you, I will come back and take you to be with me that you also may be where I am.”          John 14:1-3

Share Your Memory of
Richard
Upload Your Memory View All Memories
Be the first to upload a memory!