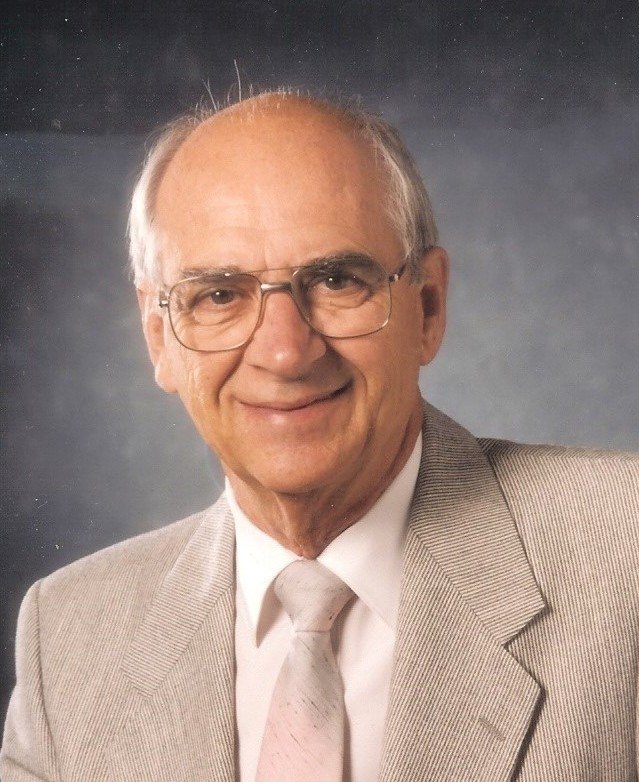 Neil Edward West, Jr., passed away Saturday, December 7, 2019 at the age of 89.  He is preceded in his passing by his parents, Mr. Neil and Hattie West Sr., and sister, Melba Gunn.  Left to cherish his memory are his loving and devoted wife of 69 years, Eloise West; daughters, Diane Lister and husband, Bobby; Pam Saxton and husband, Gene; grandchildren, Zach, Keely, Kristin, Sara, Cole, Scott and Chris; great grandchildren, Brody, Brooks, JP and Beckett; and a host of other family members and dear friends.

Neil was born and raised in Houston.  He graduated from John Reagan High School before serving his country in the United States Navy where he worked on and maintained radio and radar gear for aircraft, ranging from fighter planes to blimps.  He married Eloise, his wife of 69 years, while stationed in Brunswick, GA and soon moved back to Texas where he attended the University of Houston. He was introduced to the oil and gas industry early on and went to work for Amoco as a draftsman, developing engineering skills and carving a new class certification as a Production Specialist for the company.  Leaving Amoco in 1983 put him on the fast track to successful oil and gas production as an independent oil and gas consultant, Neil West & Associates, Oil and Gas Consultants.

Neil felt very strongly about giving back to the communities he loved and lived in.  Accomplishments along the way are too many to be counted.  He founded numerous civic clubs. He was President of the Greater Houston Civic Council (1972-1974), Co-Founder of Southbelt Civic Coalition (1983-1995), Co-Founder of South Belt Security Alliance (1983-2005), Director for the Annual Southbelt July 4th Parade (1992-2015), Founder for the 5th grade anti-gang program for Pasadena ISD, founding Board Member for San Jacinto College Foundation, Chairman for “Keep Pearland Beautiful Government Committee”, Pearland Planning and Zoning Committee for 10 years, Citizen of the Year, an active member of the Southbelt Chamber of Commerce, and the list goes on.  He was not a quitter and believed anything could be done with time and teamwork.

Neil was strong in his faith and was a leader/deacon at St. Stephen Presbyterian Church before moving to Pearland and joining First United Methodist Church.  He loved the Thanksgiving holidays when he and Eloise could help the church by donating turkeys and their time.

He had an extensive stamp collection, which he continued to work on until two years ago.  He had more than just a love for cars, NASCAR, and auto restoration, winning many awards for cars he restored.  Neil loved the Astros and Jose Altuve.  He never missed a game and always watched in full Astros gear.

He cherished time spent with his family and found great joy in his grandchildren and great grand-children.  His last words were “Hey Bud” as JP(great grandson) sat on his chest on Friday morning, December 6th.  He and Eloise always attended little league games, softball games, basketball games, or anything else the grandkids were involved in.  They loved watching them grow and loved having them over and taking them wherever their little hearts desired.  He loved children and wanted the best for all, not just his own.  There was never a time when he said “I don’t have time.”  He always made time for his kids and grandkids.  He was such a caring man, and there was no such thing as impossible.  Families long for the kind of support he gave.

In lieu of flowers, the family requests that donations be made in Neil’s honor to the American Parkinson Disease Association at www.apdaparkinson.org or the San Jacinto College Foundation at www.sanjac.edu/foundation/giving.

A Memorial service for Neil will be held Friday, December 13, 2019 at First United Methodist Church, 2314 North Grand Blvd., Pearland, Texas 77581. The family will receive family and friends from 12:00 until 1:00 pm with the memorial service following at 1:00 pm with Pastor Reggie Clemons officiating.

Share Your Memory of
Neil
Upload Your Memory View All Memories
Be the first to upload a memory!
Share A Memory
Send Flowers